The emotional roller coaster of being a Naval Academy parent has never been more intense than the past few weeks. Yes, Plebe Summer was a shock. Yes, Plebe Year was grueling. Yes, there were a million and one moments where we all thought our hair would burst into flames over the latest “OMG” moment.

All of that pales in comparison to the very real possibility that our Midshipmen of the Class of 2020 would commission via a 100% virtual ceremony (which was the plan up until just a week or so ago). After untold hours of angst which included approximately 10,325 plans put forth by parents and family, USNA leadership hatched a plan to bring the Firsties back in waves, allowing them to commission in small ceremonies where it all began, in Tecumseh Court.

How beautiful and how fitting. While we are not able to watch those small group ceremonies, we can watch a special compilation video that will air at approximately the time the Class of 2020 was supposed to enjoy the traditional graduation and commissioning ceremony in the football stadium. 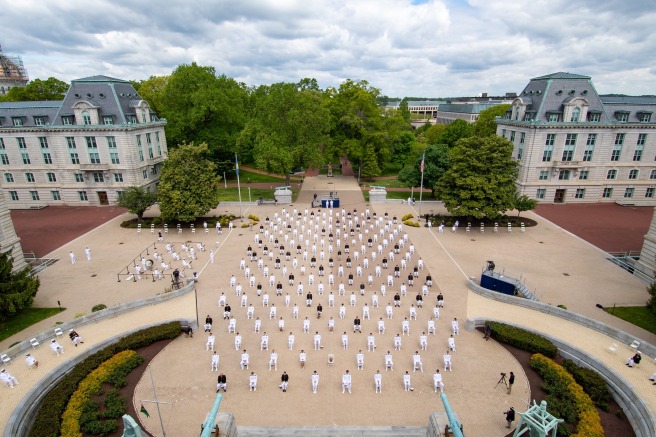 By the time we watch this video, my son will already be back home, contemplating his TAD (temporary assigned duty) and living arrangements, as well as plotting his cross-country road trip to utilize his basket leave (that’s the 30 days the newly anointed ensigns and 2nd Lts. are afforded upon commissioning).

But we will gather to watch and I’m not sure how I’ll react. Mid Mom? Oh, that’s easy. She’ll be crying through the whole thing. Mid Gram? Yeah, probably the same. The Mid and Mid Sib … probably matter-of-fact. But I’m not sure how I’ll react. I’ve been so caught up in the angst over how commissioning would unfold, I haven’t really had time to think about the actual event.

Maybe I’ll well up a little. Maybe I’ll be overwhelmed with pride and bursting with excitement over the accomplishment. Maybe a mix of all of it.

And I will no longer be able to really say, “My kid the Mid.”

It’s been quite an amazing four years. The next four? Well, I’m reminded of a tour guide we had during my first trip to Spain. At one point he said, “Yesterday is history, tomorrow is a mystery.” Can’t wait to see how it all unfolds.

Join me in praying for the members of the Class of 2020 as each one of them embarks on an exciting new chapter:

You can also read the prayer here.

Sadly, there was no Herndon Climb this year, but we did do a podcast. My optimism allowed me to plant an Easter Egg in hopes that we would all gather to celebrate Commissioning Week – the opening song includes the line, “Just send out the invitations.” Sadly, those invitations were never sent, but the pride and joy remain for both the parents of the Class of 2020 and the parents of the Class of 2023, who can say after the 22 May ceremony, “Plebes No More.” And Class of 2020 parents – there will be a celebration in Annapolis. Stay tuned for details. 😉