I first met Mike Fitzpatrick while I was managing editor for the Bucks County Courier Times, his hometown newspaper in Levittown, Pa.

As managing editor, I was a member of the editorial board, which meant that I participated in a lot of endorsement interviews, the lengthy process of talking with candidates to determine which one the newspaper would support. These interviews could be painful, as the candidates attempted to stick to their stump speech and we on the editorial board tried to dig beneath the surface.

Fitzpatrick, running for Congress for the first time, either didn’t know how to play the game or didn’t care to. When we brought up the subject of healthcare, he leaned forward and began a passionate story about one of his neighbors, a single mother who struggled to pay for her medical care. I don’t remember much of what he said that day, but the words didn’t really matter, it was his passion. He cared. Not in the way many politicians care, currying favor by showing empathy. Mike was genuinely upset that the system was failing his neighbor. I do remember how he finished the story – “We have to help people like her.”

Our lives would intersect several times after I left the newsroom.

Before my son’s Eagle Scout Court of Honor, we were told that Mike, who the troop had hoped would be a featured speaker, was unable to attend. As everyone milled about the church’s sanctuary before the ceremony, I was in the basement room where our troop meetings took place with the three guests of honor as they made final preparations before heading upstairs. Mike burst into the room, looking about.

“I’m sorry I can’t stay,” he said without introducing himself. “But I just wanted to congratulate you boys on your accomplishment.”

He shook each of their hands (then mine, “good to see you again!”) and let me snap off a quick photo before he shot out of the room. I don’t know how far out of his way he went, and he was there for less than five minutes, but made the time to be there. It’s the kind of man he was.

A few years later, Mike’s military academy panel would bestow upon my son a nomination to the United States Naval Academy. As a former journalist, I’ve seen a lot of politicians work a room, but few did it like Mike. Because, in fact, he wasn’t working the room. He was catching up with his people.

He made me laugh when we talked about nominations and service academies. One of his children announced his intention to apply to the Coast Guard Academy (which does not require a congressional nomination). His son assumed he would get some help from his father. Mike laughed as he recounted the story.

“You think I’m going to help you?” he said furrowing his eyebrows, then opening his eyes wide as he threw up his hands. “Sorry, kid, you’re on your own.” 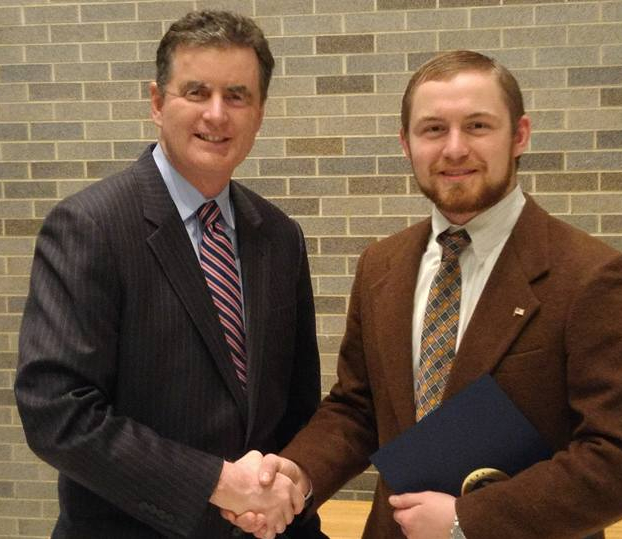 The final time I saw Mike was at the 2018 All Academies Ball in Philadelphia. You could see cancer had taken its toll on him, but he still had that smile. My Mid thanked him again for the nomination and Mike thanked the Mid for accepting the challenge to defend our country.

Before we parted ways, I asked Mike if he had given any advice to his brother Brian, who succeeded him in Congress.

He nodded and said “Legislation is a mess in Washington. I told him to just focus on taking care of people, because that’s really your job.”

Another friend put it this way on Facebook: “The secret to Mike was sincerity. He was not trying to make people feel like he cared about them. He really did care about them.”

America lost a good man this week and I am humbled to have known him, even from a distance. We can only hope that more will follow his example.

May he rest in peace.

Anchored in Tradition
An unofficial collection of fun, facts and figures about life at the United States Naval Academy
Join 1,175 other subscribers