I was trying to compile an exhaustive list of tips for parents, particularly Plebe parents, for the academic year. But it turned into an exercise of “can God create a rock so big He himself can’t lift it.” So I figured I would just toss out a few here and there.

Let’s start with one a lot of folks probably haven’t considered, but one that will, quite literally, put you in Bancroft Hall and provide a behind-the-scenes look. And what Mid Parent doesn’t want that?

Get Snapchat. I know, I know, I know. Social media is a time suck. And Snapchat is “for the kids.” Listen, you never have to post on it, but it is a great way to get a behind-the-scenes look at what’s happening on The Yard. And if you only do it during Army Week, you’ll be glad you did it.

Once you’ve added the app and created an account, just go to “Search” and type in “Bancroft Hall.” 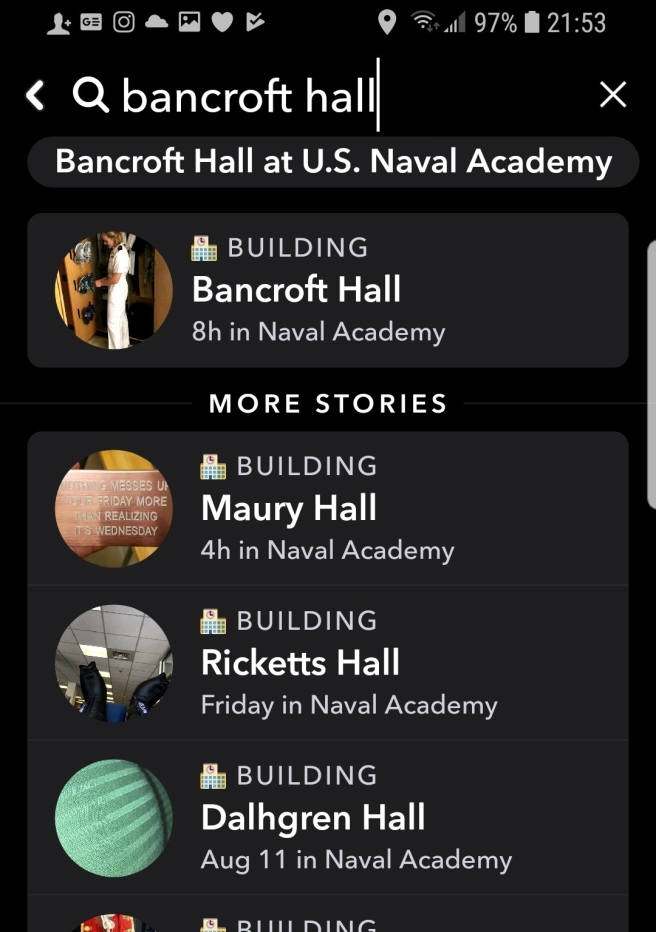 Once you click on Bancroft Hall, you will be provided with a stream of Snapchat posts, pretty much anything that is geo-located in Bancroft. Some of it is video – which can be hilariously entertaining.

Note: I removed a video I took from Snapchat here. A reader made a good point about the Mids using it because the content disappears after a bit. Good point and fair enough. Just install Snapchat and you’ll see for yourself!

And you’ll get stills, too, ranging from head-scratchers to OMG moments to, well, just about anything.

Note: I removed a photo I took from Snapchat here. A reader made a good point about the Mids using it because the content disappears after a bit. Good point and fair enough. Just install Snapchat and you’ll see for yourself!

You can search other buildings, too, but I’ve found Bancroft Hall to be the most entertaining. And, seriously, if you only use it during Army Week, it will be worth your time.

Oh, I also did A LOT of screen captures of my Mid’s personal Snapchat during Plebe Year, since I wasn’t getting, um, quite the cooperation I wanted in terms of communication. In addition to a momentary sense of relief from actually seeing him, I used the screen captures as part of the memory book I created to chronicle that first year.

Note: Since I removed the other Mids’ material, figured I should remove my Mid’s stuff, too. If you want to see pictures of the memory book I made, just let me know and I’d be happy to share!

In an unrelated note, my Mid deleted Snapchat this summer, saying he was going to stick with Instagram. But I still snoop around on Snapchat every week or two and still find it amusing.

3 thoughts on “Pro tip: How to spy on Mids in Bancroft Hall”

Anchored in Tradition
An unofficial collection of fun, facts and figures about life at the United States Naval Academy
Join 1,183 other followers