The battle between Navy and Nike won’t be found in warfare history, but it’s worth noting, though it’s left me with two unanswered questions.

It all started with the unveiling of a new logo for an L.A. shop (and longtime Nike partner). It took social media about a nanosecond to lose its collective mind over the blatant similarities. See if you can spot them: 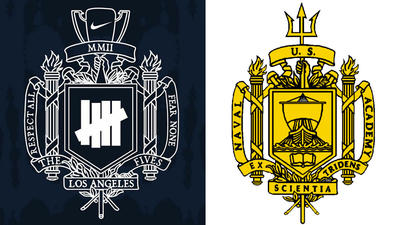 In case you had any doubt, that’s the Naval Academy crest on the right.

The Academy took the high road and wrote a simple note basically asking Nike to do the right thing. The statement read, in part, “The Naval Academy crest represents honor, integrity and leadership and is emblematic of our students and more than 80,000 alumni who serve and have served our country, many of whom made the ultimate sacrifice in its defense. It is difficult to understand why anyone would modify and use our symbol without permission for marketing and profit motives.”

That last sentence had to be the clincher.

The brand squashed the planned product launch and released its own statement, basically apologizing for being copycats.

All is well that ends well, but here are my two questions:

We’ll probably never know. But we do know that everyone should keep their hands off trademarked USNA material from now on!

Anchored in Tradition
An unofficial collection of fun, facts and figures about life at the United States Naval Academy
Join 1,175 other subscribers